Training on PRMS for 75 PCFs completed

The STEP project and Co-opbank have completed six (06) on-site training sessions on the People’s Credit Fund Reporting Management System (PRMS) for senior managers and internal auditors of 75 PCFs. These sessions were held in Vinh, Ha Noi, and An Giang from September 8 to September 28, 2022. The representatives of the State Bank of Vietnam (SBV) Head office, SBV branches, and Association of People’s Credit Funds Vietnam (VAPCF) also joined the training.

The PRMS uses input data from regulatory statistical reports, data warehouse techniques, and business intelligence software to allow users to efficiently exploit more than 100 financial key performance indicators via a set of about 20 different output reports. The PRMS solution was designed to support the whole network of nearly 1200 PCFs, not only the 75 participating PCFs, by providing a comprehensive picture of the system and each PCF’s financial performance and risk situation. 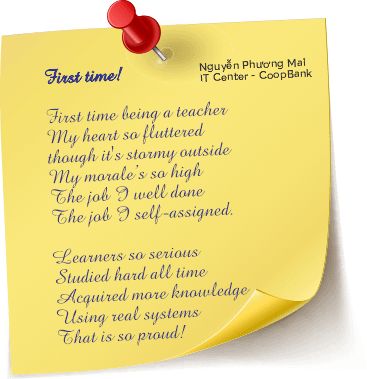 The training sessions provided PCFs a general understanding of PRMS and, most importantly, how to use output reports to make business decisions. The majority of trainees in the three regions were enthusiastic about the system. “The system will be very useful in monitoring risks and performance of my PCF in comparison to the entire network. I was so impressed when I have first introduced to this system a few months ago. I will use the system immediately after training.” said Mr. Thien, the CEO of Long Hung A PCF in Dong Thap.

These training sessions have marked the collaboration between the STEP advisors and the Co-opbank officers of HO and branches. The Co-opbank trainers are specialists from IT, Credit and Members Services departments who have developed and operated the PRMS. They also accompany and support when the PCFs need. Ms. Mai, a representative of the Co-opbank IT Center, stated that her first experience as an instructor provided her with a wealth of knowledge and enhanced her teaching abilities (see the poem in the comment).

The PRMS associated with these training sessions and a variety of training materials on the e-learning platform will effectively improve PCFs’ risk management and financial oversight capabilities. Furthermore, the SBV and VAPCF’s close participation, as well as the Co-opbank’s acquisition of knowledge and skills from the STEP project will aid in scaling up the benefits of these tools and ensuring the continuity of capacity building.